The IML Great Debate has been part of Canberra’s professional and social scene for the past 18 years and is an event that cannot be missed. Come along to this leadership event and invite your corporate team and enjoy lots of laughs and network with like-minded professionals. In short, it’s a whole load of debating fun over lunch whilst networking and celebrating diversity in the workplace!

This year we’re thrilled to announce the thought provoking topic ‘Equal pay will close the gender gap’, so get your ticket today and join in the #equalpay conversation!

Don’t delay, book your tickets today and keep a look out for future communications as we announce the witty and well-credentialed speakers and teams! 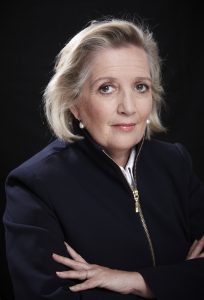 Jane Caro is an author, novelist, journalist, broadcaster, columnist, advertising writer and social commentator, and together with her husband they are beef producers and timber growers.

She has published eight books, including two novels and her memoir “Plain Speaking Jane” was released in September 2015. She is currently working on ‘Just Flesh & Blood’ the third and final book in the Elizabeth Tudor trilogy which will be published in 2017.

A regular on Agony, Q&A, The Drum and Sunrise, she appears in the media often. In 2013 she co-created, co-produced and presented a six-part radio series for ABC Life Matters – For Better, For Worse. The series was so successful it is now a five-part TV series for ABC Compass. She writes regular columns for Sunday Life and IML’s magazine, ‘Leadership Matters’. @JaneCaro 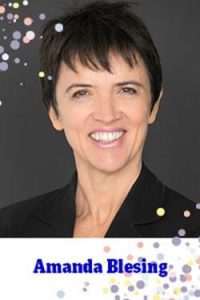 Amanda Blesing is one of Australia’s freshest thinkers and speakers on feminine ambition- how to spark it, tackle it and see it flourish. Amanda helps career-minded women in leadership to build their presence, personal brand, and fast-track their path to the boardroom. 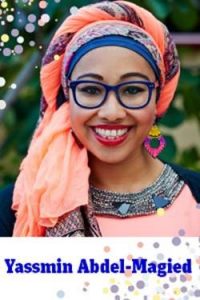 Yassmin Abdel-Magied is a mechanical engineer, social advocate, writer, and ‘petrol head’. Debut author at 24 with the coming of age memoir Yassmin’s Story and the 2015 Queensland Young Australian of the Year, Yassmin advocates for the empowerment of youth, women, and those racially, culturally and linguistically diverse backgrounds. 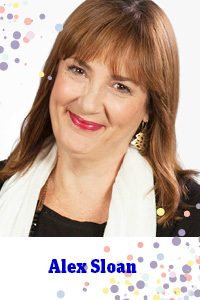 Alex Sloan recently retired from ABC radio after 27 years. During that time, she worked for ABC Rural, Radio National and ABC Local Radio 666 where she presented on 666 Drive, Weekends, Mornings and the Afternoons program. To recognise her service to the community, this year Alex was named the 2017 Canberra Citizen of the Year. 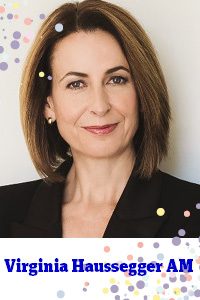 Virginia Haussegger AM is a passionate women’s advocate and communication specialist. She is also an award-winning television journalist, writer and commentator, whose extensive media career spans more than 25 years. In late 2016, she was appointed to head a new gender equality initiative, the 50/50 by 2030 Foundation, at the University of Canberra’s Institute for Governance and Policy Analysis (IGPA), where she is an Adjunct Professor. 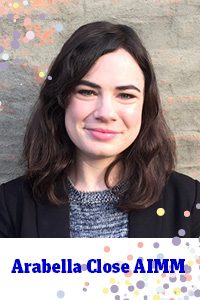 Arabella Close is the co-founder and co-organiser of fEMPOWER Workshops, a Sydney organisation running high school workshops on how to recognise and challenge gender inequality. fEMPOWER tackles gender stereotypes and how they are linked to violence against women, women’s participation in the workplace and societal expectations more broadly. The workshops focus on how gender intersects with sexuality, ethnicity, ability, class and education. fEMPOWER has recently extended to Melbourne and wider Victoria.  She also works as a freelance writer and is currently completing her post-graduate law degree in Melbourne. 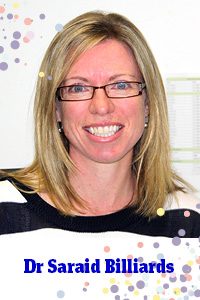 Dr Saraid Billiards is the Head of Strategy and Engagement at Science in Australia Gender Equity (SAGE). SAGE is a program of activities designed to improve gender equity and diversity in the Science, Technology, Engineering, Mathematics and Medicine (STEMM) fields. One key element of SAGE is trialing the Australian Pilot of the Athena SWAN Charter. Athena SWAN is a renowned UK program providing an evaluation and accreditation framework for gender equity issues in STEMM. She also has extensive experience in research, management, policy development, peer review, women’s leadership, stakeholder management and engagement, international relations and program delivery. 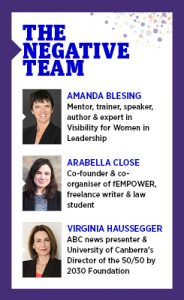 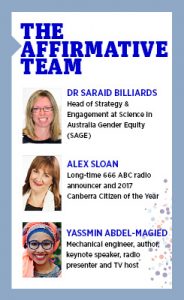